skip to main | skip to sidebar

We've decided that every Sunday we're going to have pancakes for breakfast. Like many other English people we tend to only have pancakes on pancake day and each year we say 'we must have pancakes more often' and we never do. Americans eat pancakes regularly and with the huge potential for different toppings / fillings I feel that we are missing out.

This morning I made American style pancakes and we both thought they were delicious. We had the first two with cherry pie filling and the second two with maple syrup. 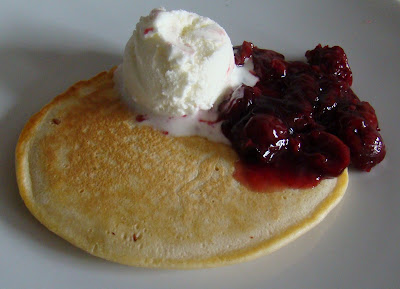 Methods
1) Sieve the flour, baking powder, sugar and salt into a large mixing bowl.
2) Beat the egg in another bowl and add the milk. Whisk for a minute or two and then add the olive oil. Whisk again for another minute.
3) Add the liquid mixture to the bowl with the dry ingredients and mix together with a fork. Unlike when making British pancakes all the lumps disappeared very easily. Leave to stand for 5 minutes.
4) Heat a small amount of butter in a frying pan and then add a ladle full of the batter to the pan. The pancakes are supposed to be smaller than British ones so I managed to fit two in our frying pan although that meant they came out more oval than round. Cook on a low-medium heat until the pancake starts to bubble and then turn over. Cook until golden on both sides. Makes 5 pancakes.

I've made a long list of toppings that I want to try over the next few weeks. The following are the ones I'm most looking forward to: